Information contained in the Institutional section of this website is not intended for accredited investors in any jurisdiction in which distribution or purchase is not authorized.

The information is intended for institutional investors and their advisors and consultants and is published for informational purposes only. An “Institutional Investor” is a person who is a “wholesale client” under section 761G of the Corporations Act, which includes persons falling within one or more of the following categories:

Persons who do not fall into one of the above categories and are not otherwise an institutional investor should not review the information contained in the site. This website is supplied on the condition that it is not passed on to any person who is a retail client within the meaning of section 761G of the Corporations Act.

Performance data shown represents past performance and is no guarantee of future results. Investment return and principal value fluctuate so your investment, when sold, may be worth more or less than the original cost; current performance may be lower or higher than quoted. Investors should be aware of the increased risks associated with investments in foreign/emerging markets securities, high yield securities and smaller companies.

You are solely responsible for evaluating the risks and merits regarding the use of the website and any services provided within. Nothing contained in the website constitutes a solicitation, recommendation, endorsement or offer to buy or sell any securities or other financial instruments.

What is the likelihood and financial and market implications of a Greek default?

What is the situation with Greece at present?

The Greek government, led by the left wing Syriza party, is attempting to negotiate with the European Central Bank (ECB), the International Monetary Fund (IMF) and the European Union (EU) for the release of the next €7.2bn in emergency funding. The funding is part of an ongoing program of stabilising the Greek economy and ensuring that the Greek economy remains part of the European Economy.

The Greeks have a deadline at the end of June for the repayment of €1.5bn and a further €3.5bn in July. If these payments are not made, then the Greeks will be in default. This is a situation the Europeans are keen to avoid, as it has major implications for the Greek banking system and has the potential to impact other parts of the European and Global banking system.

The Europeans are looking for the Greeks to implement a number of economic measures such as increasing the current pension age and increasing taxes – which will raise revenue and prevent the financial position of the Greek government from worsening. The Syriza government, which was elected under an anti-austerity platform, has been pushing for a range of more lenient measures.

This is where the current impass lies.

Why has a referendum been called?

The Greek government has called for a Referendum to be put to the people on the current range of measures put forward by the Europeans. ‘Do you approve/agree with the range of measures put forward by the institutions’? This can be seen as a political tactic and a way for the government to continue to be seen as defending the citizens and not losing face if the vote is passed in the affirmative.

Even if the vote is passed, the Greeks will likely be in technical default as the original deadline will have expired. The referendum, whilst bringing the current funding decision to a head, is actually a side-show in the broader conversation of whether Greece should remain part of the Eurozone.

The Greek Banking system is now closed until this is resolved. Banks are set to be closed until July 6th with cash withdrawals at ATM’s limited to €60 per day.

What are the longer term implications of Greece and will it remain in the Eurozone?

The Greek economy remains in a precarious position. Unemployment is at extreme levels and the economy has little in the way of flexibility in its monetary mechanisms (such as exchange rates) to pull itself out of its malaise. The current levels of debt are extreme and the Greeks simply cannot make these payments without significant structural and social reform. Even with this reform, the standard of living will continue to decline for Greeks – impacting the current and future generations.

Unfortunately, it is impossible to predict whether the Greeks will remain in the Eurozone. The recent deadlock in the negotiations will have increased the probability of a Greek exit. The major concern for policy makers is the potential impact on the banking system and the contagion to other economies in Europe. A worst case situation might mean that the ECB no longer supports the Greek banks, with the Greek government in no position to providing funding. This would see a run on the banks’ finances and could potentially lead to social unrest, and we have started to see signs of this. This could in-turn lead to a flight to safety, with a run on less-capitalised banks in other parts of Europe and a sell-off across financials and credit markets.

However, we believe that this situation will be avoided at all costs. Whilst it is not inconceivable that we see a Greek exit, the IMF, ECB and EU have policies in place to protect other parts of the European banking system. We have also seen an improvement in the capitalisation of the European banking system over the past five years, with the southern Europeans now less susceptible to flow-on impacts of a Greek default.

That is not to say that Greece will not be impacted. A Greek exit from the Euro would see a major devaluation in their new currency, large deflation in asset prices and low standards of living.

Either way, the Greeks have a number of tough decades ahead of them. We think the Europeans however are better positioned for such an event. 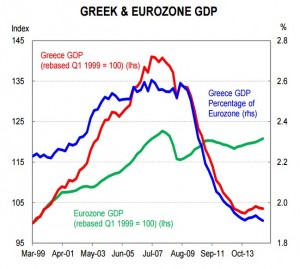 What this means for markets and your portfolio?

Given the uncertainty around the referendum and potential for a Greek exit, markets are likely to remain volatile in the near-term. However, we expect that the implications of a Greek exit from the Eurozone are manageable, and a significant restructuring of loan portfolios has materially reduced the risk of contagion within the broader European financial system of a Greek default. We do not believe that this should change our view on the overall improvement in the global economy.  Earlier in the year we increased our allocation to Europe in some of our portfolios as part of our overall equities positioning and believe that the European economy will continue to recover. Whilst we expect that the near-term uncertainty surrounding Greece is likely to result in higher than average levels of volatility in share markets, we are actively monitoring valuation fundamentals and remain prepared to act and take advantage of any mis-pricing that invariably arises as a result of higher levels of volatility.

We would see this as an opportunity to reweight our portfolios for continuation of this global recovery theme.

It is also worthwhile to highlight the likely implication that monetary accommodation (lower interest rates) will continue for longer than would have otherwise been the case. This should somewhat support equity and bond markets. The US Federal Reserve has already made the change to start referencing “international developments”, a big change from the view it took 3 or 4 years ago.